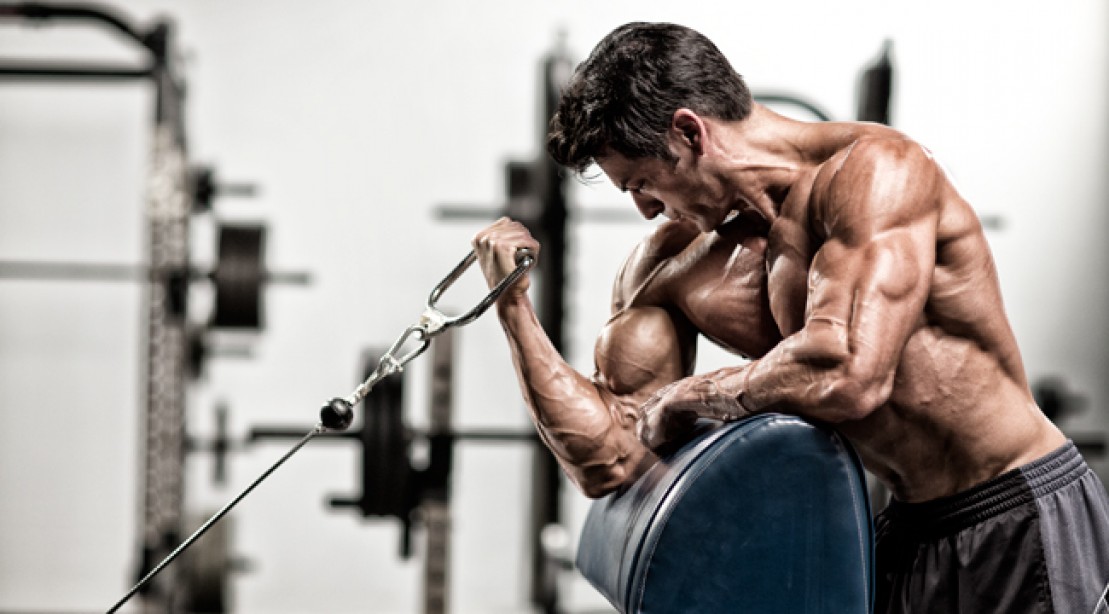 There are many exercises for biceps, but all of them are conditionally divided into two large groups – basic and isolating. Biceps can only be pumped through the use of both.

The most popular muscle group that is pumped at home and in the gym is biceps. However, this does not mean at all that training biceps is very easy. Often, increasing the mass and volume of hands is not so simple. 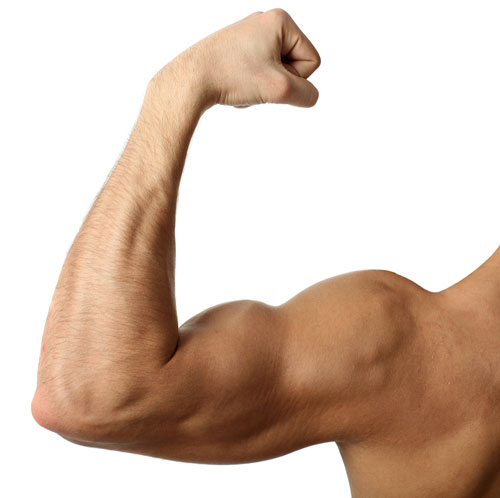 Many people dream of having pumped biceps. Some athletes are more lucky, and their hands “swell” after each workout, while others have to work pretty hard in the gym to get the minimum result.

How to pump biceps?

In the modern world of sports and bodybuilding, there are a huge number of approaches to training and teaching methods. There are many ways to build biceps – use special exercise programs, super sets, splits, do isolating and basic exercises, increase the load, etc. Such an abundance of training methods suggests that there is no clear system for pumping biceps. All programs work, but with different efficiency. In many respects, the result of training depends on the genetic characteristics of a person, the structure of the body and a predisposition to the development of muscle fibers. There are athletes in whom biceps increase in size over several workouts. But, as practice shows, pumping this muscle group is quite difficult. The people call biceps the most stubborn muscle of the human body. 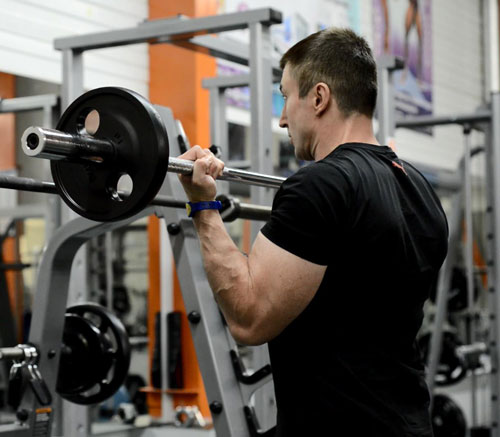 The development of biceps should take place no more than 1 time per week. Otherwise, the muscles will not have time to recover.

Why is biceps not growing?

This question is the most common, especially among beginner athletes. There may be several reasons:

Important! In some cases, both the competent approach to training and the correctly performed exercise technique are not enough for pumping up biceps.

Biceps is a muscle group that does not require heavy weight at the beginning of a workout. Basic exercises for biceps (lifting the barbell, “hammer”, etc.) are perfect for those with a hand less than 40 cm in girth. Isolation exercises should be added after a simple base of effective exercises has been completed.

Large arms with pumped biceps will not appear in an athlete weighing less than 70 kg. Therefore, thin athletes should not perform useless exercises with large loads.

The following publications will perfectly complement this material:

Many beginner athletes at the beginning of classes ask themselves how many exercises to do during training. Experienced trainers recommend 2-3 exercises for biceps during one trip to the gym. However, this does not mean at all that other strength exercises for pumping the back, legs and buttocks do not need to be done.

In order to have beautiful pumped up hands, it is necessary to additionally work out the muscles of the chest, back and buttocks. Otherwise, large biceps against the background of other weak muscles will not look very attractive.

The hammer exercise is popular among athletes who want to shape the biceps and work out its side. It is performed from a standing position. In both hands they take dumbbells with a neutral grip and alternately lift the shells to the shoulder. The load should only be on the biceps muscles. The back can be slightly bent.

Advice! You can perform hammer lifting of dumbbells with both hands at the same time. Such a training will be more effective, as the load on the muscles increases. 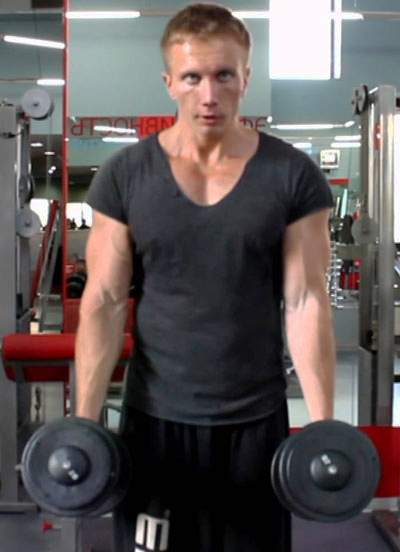 Hammer lifts for biceps can also be done with weights.

Barbell lifting is the main exercise in training programs for an external biceps beam. It allows you to increase muscle volume, give strength to the arms, make attractive the middle, lower and upper biceps. The brachial and internal brachial muscles are also being worked out. The exercise is performed from a standing position, the bar neck is captured by the hands from below. A sports apparatus is lifted upwards in an explosive motion by contracting the muscles of the biceps and slowly lowered downwards. Elbows cannot be set forward. You need to help yourself with your feet, not your back, otherwise you can get injured.

Advice! In many training programs, it is recommended that you do the lifting first. When the result grows to 50 kg, you can add exercises with dumbbells to the workout. 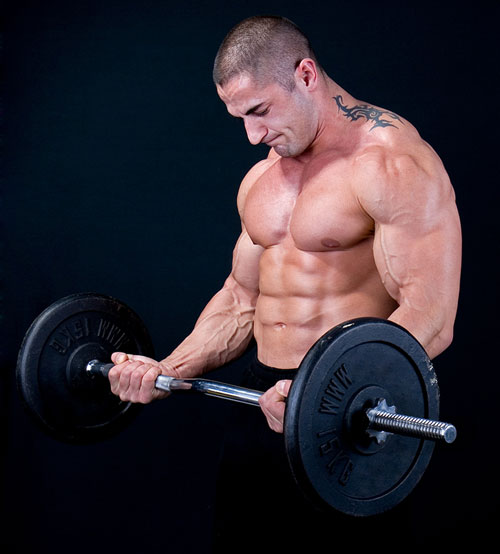 Many trainers advise using a curved barbell bar. It is believed that this projectile is more convenient when pumping biceps.

Pull-ups on the horizontal bar, despite the apparent simplicity of the exercise, have a very positive effect on the development of biceps. Such an exercise on the external part of the biceps is very effective, the main rule is to observe the execution technique. You can do pull-ups with both direct and reverse narrow grip. At first, it is enough to do an exercise with your own weight. When it becomes easy to pull up, you can complicate your task by hanging a load at your feet. At home, some pull themselves up by putting a heavy backpack on their shoulders.

Important! To better pump your biceps, when pulling up, it is better not to straighten your arms completely. 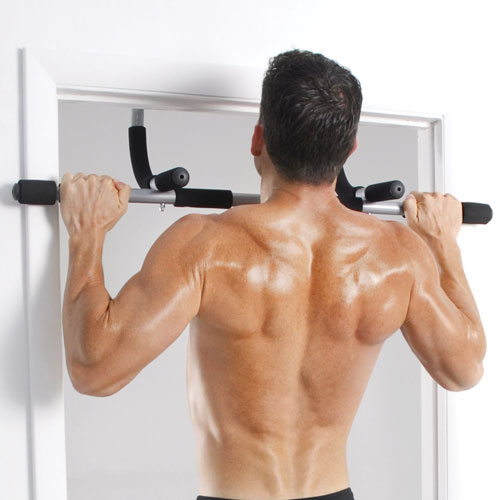 You can engage in a horizontal bar not only in the gym. Some hang up the simulator at home, others work out on street venues.

A set of exercises that act only on a specific muscle group is called insulating. The main ones are:

Isolating exercises are recommended to be performed after the base of basic exercises for biceps. Some trainers advise experienced bodybuilders who have been working on the arm muscles for at least two years to start the group of these “grinding” exercises.

Concentrated bending of the arms with dumbbells is performed from a sitting position. The dumbbells are raised alternately, the elbow of the trained hand rests on the inner surface of the thigh. Bending is performed at a moderate pace, without jerking. Do not “go too far” with the weight of shells, you need to really assess your capabilities. 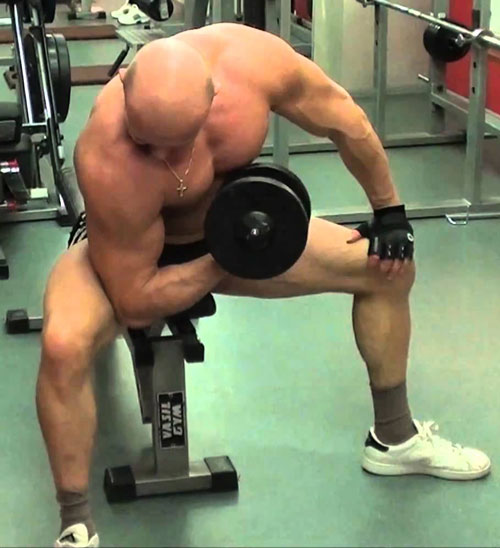 Concentrated bending of the arms is usually done with dumbbells; experienced bodybuilders use weights.

Bending the arms at the bottom block is a less effective exercise, unlike the previous one, but no less popular. The simulator cable handle replaces the bar of the bar. Exercise is performed on the principle of lifting a sports apparatus. When performing the exercise, the arms should be fully extended, the body should remain unchanged. 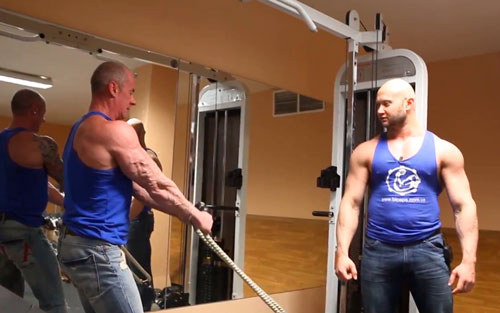 The block simulator is often used to pump the muscles of the arms, back and chest. The principle of training on it is similar to lifting the neck.

Bending the arms on a special simulator ( Scott’s bench ) allows you to work out the biceps relief and its shape. Hands are placed on a stand so that the elbows are motionless. On exhalation, the projectile is lifted, on inspiration – slowly lowered. Athletes train biceps on Scott’s bench with dumbbells and a barbell.

We recommend that you also pay attention to the article:  Biceps Machine Exercise Machine 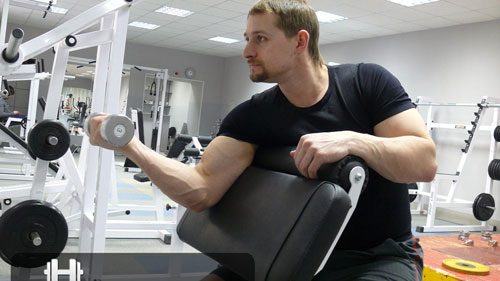 Scott’s Bench is a famous biceps muscle trainer. It effectively pumps the lower and side of the hands.

Biceps can only be pumped up with hard work. Muscles love “wear-out” training, don’t feel sorry for yourself and relax, otherwise it will be difficult to achieve a result.